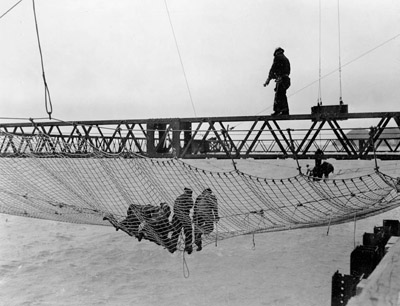 When the Golden Gate bridge was being built in San Francisco, a number of workers lost their lives by falling from precariously high positions.

As a result, the work proceeded slowly until someone hit on the idea of building a net under the construction area so that when a workman fell, he would not fall to his death but would be caught by the net.

A giant safety net was developed at a cost of $100,000 — big money back then. It was the first time something like this was used at a construction site.

With the security of the net below them, men were able to move about at a faster pace because they knew that if they fell their lives would be spared.

With the security of the net below them, they could work without the dread of uncertainty.

We may not be able to see the net below us, but it’s there.

Our security comes from a loving, all-powerful God who protects us every step of the way. David said…

I have set the Lord always before me. Because he is at my right hand, I will not be shaken. (Psalm 16:8)