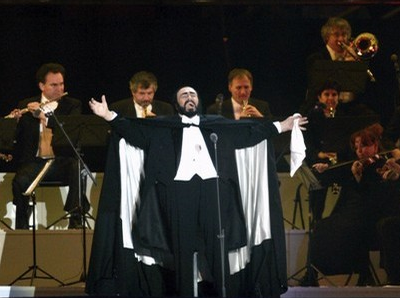 He loved sports, and dreamed of being a football goalkeeper (what others would call a soccer goalie).

He loved teaching, and was attracted to the security this profession offered.

And, of course, he loved to sing.

When an elite professional tenor offered to take him as a student without cost, Pavarotti faced a decision: Which future should he choose?

His father said to him, “Luciano, if you try to sit on two chairs, you will fall between them. For life, you must choose one chair.”

Pavarotti later told Guideposts: “I chose one. It took seven years of study and frustration before I made my first professional appearance. It took another seven to reach the Metropolitan Opera. And now I think whether it’s laying bricks, writing a book — whatever we choose — we should give ourselves to it. Commitment, that’s the key. Choose one chair.”

Of all the words written by the Apostle Paul, perhaps his most powerful phrase is: “But this one thing I do.”

Everything about Paul’s life pointed in one direction. Everything he did led him to one chair. His prize was doing what God had called him to do — to know Jesus and to make Jesus known.

Life is a reverse of the game Musical Chairs, in which there are more players than places to sit. You have lots of chairs to choose from. Those who live life best are those who have the courage to choose one chair.

Have you chosen yours?