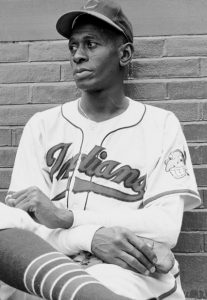 Satchel Paige threw his first major league pitch at the age of 42.

Actually, he was good enough to play in the majors at 18, but he couldn’t: Satchel Paige was African American.

Seven years after Jackie Robinson broke the color barrier in baseball, Paige, an undisputed superstar everywhere but in the major leagues, finally got his chance.

Cleveland owner Bill Veek was criticized for adding such an “old man” to his roster; some sportswriters and critics called it a publicity stunt. Others said Paige was finally getting the break he had deserved for years, though most doubted his ability to compete effectively at his age.

Paige silenced the critics when he won his first three games as a pro, shutting out Chicago twice in the process.

All along he knew he was good enough to pitch in the major leagues, and when he finally got his chance, he proved it. He went on to win 28 games during his pro career, and even made a brief comeback at the age of 59, pitching three innings for the Kansas City A’s.

He approached his major league pitching debut no differently than he approached any of the 2,500 games he pitched during his career. “It was just another game,” he said. “And home plate was where it always was.”

Though Paige had the ability to make throwing a baseball look effortless, he spent his life perfecting the art. And, eventually, he got his chance to show the world he was capable of competing with the best.

Do you see a man skilled in his work? He will serve before kings; he will not serve before obscure men. (Proverbs 22:29)

Solomon is emphasizing that commitment to quality is more important than self-promotion. Do your job well, he says, and you’ll get your chance to serve before the best.

In the work that you do, you may have to wait years before you get your chance to play in the big leagues. And the fact is, the chance may never come in the way you would like.

But you can be sure your time will come.

Believers can work with the assurance that our jobs — even the most menial tasks — are performed before our King. Our efforts do not go unnoticed. All the more reason to pursue excellence in all we do.

Your time will come; never give up on the dream of being the best.