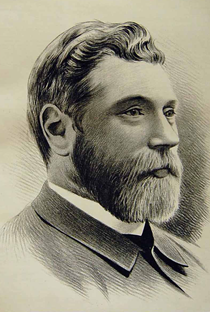 Here’s another hymn story. This one takes place in Scotland in the mid-to-late 1800s.

It’s about about George Matheson who, at the age of 20, had what appeared to be a brilliant future ahead of him. He was an outstanding theology student, preparing for what would certainly be a distinguished career in academia. He was also engaged to the woman of his dreams.

Everything was just right … except he was beginning to lose his sight. Slowly, little by little, day by day, his world became increasingly dark. How can one become a scholar with no ability to read? Braille was still in its infancy; the options were limited.

His fiancé decided that she couldn’t bear going through life with a vision-impaired husband, so she broke off the engagement, and George Matheson’s world came undone.

However, he didn’t let this setback hold him back. He decided, instead, to become a pastor, and began serving a small church.

His sister became his devoted assistant. She studied Greek, Hebrew, and Latin to help with his sermon preparation and his writing. She accompanied him throughout the day, assisting him in his pastoral responsibilities.

Over the years, George Matheson became quite successful in the ministry: he became the pastor of a large church, and he wrote several books of theology, poetry, and sacred music.

And then one day his sister told him that she had fallen in love. She had made plans to marry, and would soon be leaving to begin a new life and family with her husband.

George realized that he would be alone. For 20 years his sister had been his connection to the seeing world. She had read to him, she completed his research, she had been his scribe, as well as his partner in ministry … and now he was alone again.

On the night before her wedding, he said, “Something happened to me, which was known only to myself, and which caused me the most severe mental suffering.” Those close to him understood that he was reminded of the time so many years before, as he was preparing to get married, and the love of his life let him go. And now he was losing his closest friend and confidant — his dear sister.

O Love that wilt not let me go,
I rest my weary soul in thee;
I give thee back the life I owe,
That in thine ocean depths its flow
May richer, fuller be.

There are many who understand on a deep and personal level the story behind this hymn, and what George Matheson felt, because you, too, have at times felt abandoned and alone. No doubt we have all felt this way.

In a psalm written later in life, King David wrote…

If I rise on the wings of the dawn, if I settle on the far side of the sea, even there your hand will guide me, your right hand will hold me fast. (Psalm 139:9-10)

Your right hand will hold me fast.

To say it another way: You will not let me go.

God loves you with a love that will never let you go. Even when you were at your worst, he sent his very best, his only Son, to die on the cross, so that you might live. No circumstance of life can separate you; nothing can take you from his hand.

… for I am your God; I will strengthen you, I will help you, I will uphold you with my righteous right hand. (Isaiah 41:10)