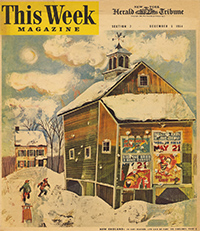 In 1954, This Week Magazine — with 11 million readers — asked a handful of high profile pastors and theologians a compelling question:

“If, as a result of some cataclysm, it were possible to retain just one passage from the Bible — what would your choice be?”

Reinhold Niebuhr, one of the most respected and influential theologians of the 20th century, chose the following…

And be ye kind one to another, tenderhearted, forgiving one another, even as God for Christ’s sake hath forgiven you. (Ephesians 4:32)

In explanation, he said that this verse “…combines the high point of the Christian ethic, which is forgiving love, with a reference to the whole basic of the ethic, which is the historical revelation in Christ.”

The highest achievement for the believer, you could say, is to forgive others … because forgiveness is the foundation of Christ’s completed work on Calvary:

In whom we have redemption through his blood, the forgiveness of sins, according to the riches of his grace that he lavished on us. (Ephesians 1:7-8)

God lavished his mercy on us so that we might lavish mercy on others. Let’s not, then, take lightly this command to freely share with others what God has freely given to us.