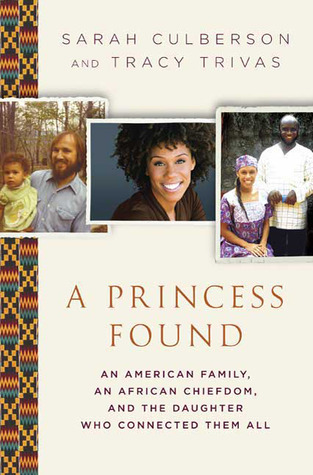 Today’s memo is about Sarah Culberson.

Sarah was born in 1976 in West Virginia. After being placed in foster care for a year, she was adopted into a loving family — the Culbersons. Both parents were teachers. She grew up active in the United Methodist Church.

Sarah had always wondered about her heritage, so after graduating from college, she hired a private investigator to find her biological parents.

Her birth mom, she discovered, had died of cancer in the early nineties.

But it was what she learned about her birth father that changed her life forever.

As it turns out, Sarah wasn’t just a young woman from West Virginia. She was royalty. A princess.

Her father was now a ruling member of the Mende tribe in Sierra Leone. They began to correspond, and soon he invited her to Africa to meet her family.

When she arrived she received a royal welcome, with hundreds coming to greet her.

She kept asking herself: “What did I do to deserve this? I’m just Sarah from West Virginia.”

But she’s not just Sarah from West Virginia. She was born Princess Esther Elizabeth; that’s who she is. She had lived her life not knowing that she was a member of a ruling class — a princess in disguise. And then she discovered her true heritage.

Today, Sarah lives an amazing life. After pursuing a career in acting, she now works in education, she’s a public speaker, and she maintains close ties to both of her communities and both of her families. (Here is her website)

I love this story because it is — incredibly — similar to our story. We, too, have a royal heritage. We’re king’s kids, you could say.

And yet some believers remain unaware of who they really are.

You are a chosen people, a royal priesthood, a holy nation, God’s special possession, that you may declare the praises of him who called you out of darkness into his wonderful light. (1 Peter 2:9)

Today, take a moment to consider who you are in Christ, and who he has made you to be.

The photograph of Princess Sarah Culberson by Elunaman is licensed under Creative Commons.