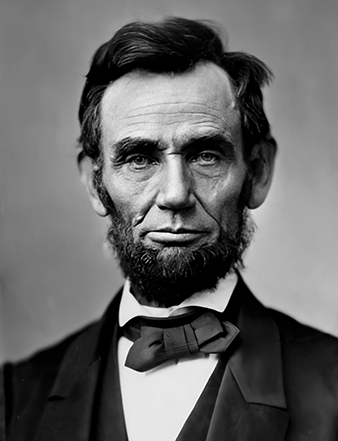 During a dark period of Abraham Lincoln’s life, at the young age of 32, he wrote:

“I am now the most miserable man living. If what I feel were equally distributed to the whole human family, there would not be one cheerful face on earth.

“Whether I shall ever be better I cannot tell; I awfully forebode I shall not. To remain as I am is impossible; I must die or be better, it appears to me.”

“The year that is drawing toward the close has been filled with the blessings of fruitful fields and healthful skies. These bounties are so constantly enjoyed that we are prone to forget the source from which they come.”

Abraham Lincoln’s early years were filled with failure. Yet, the final years of life, though certainly not free from struggle, were years of happiness, fulfillment, achievement, and success.

Because of his capacity to outlast the blues, Lincoln experienced — in this life — the enormity of God’s blessing. He didn’t give up hope, even when it seemed he had no reason to hope.

The same could be said for King David. As you read through the Psalms, you get a glimpse of his struggles and heartaches. (Psalm 10, 38, 102 come to mind; there are many, many more.) And though his life was not without tragedy, David ended his days enjoying the benefits of God’s blessing in his life.

In a phrase, David outlasted the blues. His final words, recorded in 2 Samuel 23, were:

Is not my house right with God? Has he not made with me an everlasting covenant, arranged and secured in every part? Will he not bring to fruition my salvation and grant me my every desire? (2 Samuel 23:5)

It’s almost as if the reward for tenacity is that our problems eventually give up and leave us alone. We certainly see in scripture that clinging steadfastly to hope in God’s mercy ultimately pays off far beyond our greatest hopes.

Today, you may be facing an anguish that borders on despair. But there’s more to your story than just what you are experiencing today. God will bring to fruition your salvation, full and complete. And he will grant your heart’s desires.

This gives us a reason to keep on … to outlast the blues.