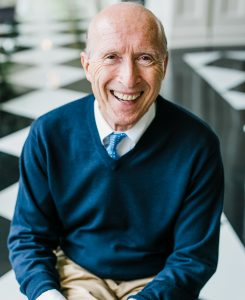 Dr. Gerald Bell is the co-author of the best-selling The Carolina Way with legendary basketball coach Dean Smith. He’s also the founder of the Bell Leadership Institute.

Several years ago, Dr. Bell surveyed 4000 retired business executives, with an average age of seventy, asking one key question: If you could live your over again, what would you do differently?

The number one answer:

“I should have taken charge of my life and set my goals earlier.”

The other top answers included:

Few of us are at the beginning of our career; some of us have already rounded third. But it’s not too late to make your life about the things that matter most.

Anyone who’s willing can take charge of their life today, even if there’s not much as time left on the clock as there used to be.

Anyone who’s willing can take charge of their health today, even if it’s more of an uphill climb than it once was.

Anyone who’s willing can begin making themselves available to their closest friends and family today, even if the relationship has faced hurdles in the past.

For those still in the early stages of their career, these five values are certainly good guidelines to follow.

For those who are in the later stages of the journey, they’re still good to go by.

But seek first the kingdom of God and his righteousness, and all these things will be added to you. (Matthew 6:33)