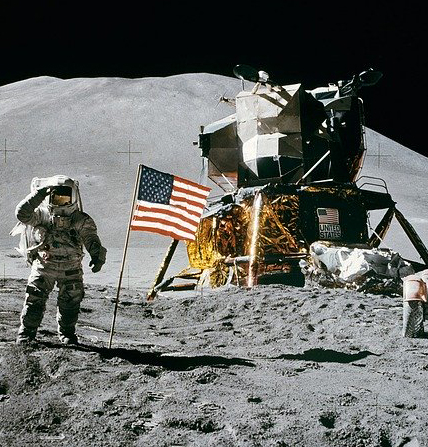 Today’s reading is an illustration from a sermon I preached back in the nineties … and the principle is still true.

On July 20, 1969, when Neil Armstrong walked on the moon, he was the focus of attention for the entire planet. Even today, his is the name most associated with the moon voyage. His statement “One small step for man…” will never be forgotten.

What often is forgotten, however, is that the Apollo expedition succeeded because a team of committed individuals sacrificed day and night for years to make it happen. Neil Armstrong was only one of 218,000 people involved.

He may have gotten most of the recognition, but he would be the first to tell you that it was a team effort.

There’s a story about a horse-pulling contest held at a county fair.

The second place winner pulled a sled of 1000 pounds.

The first place winner pulled a sled of 1500 pounds.

But when the two horses were teamed up, together they pulled 4000 pounds of weight.

Life is a team sport. God intends for us to work together in order to achieve success.

And as Solomon said…

“Two can stand back to back and conquer. Three are even better, for a triple braided cord is not easily broken.” (Ecclesiastes 4:12)

Do you want to accomplish more each day? Resist the temptation to go it alone. Look for ways to help those around you pull more weight.