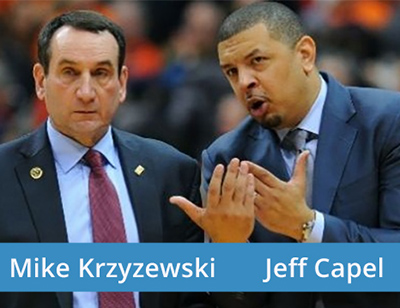 In last week’s memo I talked about the “gratitude ball” that Duke University used for motivation during their NCAA championship run in 2015.

The idea was implemented by head coach, Mike Krzyzewski.

It’s important to note, however, that the idea didn’t start with him. It came from the associate head coach, Jeff Capel.

Krzyzewski realized right away it would be an effective motivational strategy, so he grabbed hold of the suggestion and made the most of it.

I like everything about the way Krzyzewski handled this.

First, he fostered a leadership environment where assistants and associates felt free to share their ideas.

Second, he recognized a good idea when he heard it, and he was willing to put it to work — even though it wasn’t his idea.

Third, he made it a point to give Capel the credit he deserved.

This is how effective leaders do it.

The simple truth is, if every workable idea has to come from you and you alone, your leadership efforts will always want for workable ideas.

But if you’re willing to listen, and willing to take a risk on someone else’s suggestion, and wiling to give credit when it credit is due, the team you lead will reap the rewards.

There are brilliant ideas all around you, ready to be recognized, waiting to be acted upon. Could there be one nearby that you have overlooked?